Text EDM to 49798 for concert updates.
COVID-19 Show Policy: There are no restrictions on this show but we encourage face masks when you can not social distance and ask that you stay home if you are feeling sick or have been exposed recently to someone with COVID-19.
A love for SUBwoofers and elecTRONICS has brought us Subtronics. Growing up in Philadelphia, PA, Jesse Kardon
aka Subtronics had a passion for his drum set and Radiohead. While in high school, he discovered dubstep and
became enamored with the scene. Having never heard this style of music before, Jesse was inspired to jump into
the world of production, learning the basics via tutorial videos. Fusing his unique blend of cutting-edge sound design
with hard-hitting bass, Subtronics seeks to push the envelope. On the live front, he has built a rabid following with
his high energy sets and advanced mixing skills.
When his national sell-out Cyclops Invasion Tour was cut short due to the global pandemic in 2020, Subtronics
jumped into the world of livestreaming and became an official Twitch Partner on the platform. Throughout the
summer and fall, he pioneered safe, socially distanced Drive-In and Pod events with a 35+ date sell-out run. In
September, he dropped an exclusive Sample Pack on Splice and went on to launch his own record label, Cyclops
Recordings, in December.
Cyclops Recordings is home to his last four EPs, as well as the inaugural ‘Boot Camp’ label compilation, featuring
tracks from Subtronics himself in addition to the next generation of producers. He has additional releases with Ultra
Music, Never Say Die, SubCarbon, Deadbeats and Kannibalen. Augmenting his own deep catalogue, Subtronics
has collabs with Excision, Slander, Boogie T, Ganja White Night and KAYZO, just to name a few. His track
“Griztronics”, co-produced with notable bass act GRiZ, peaked at number nine on the Billboard Dance Charts in
2019 and has over 1 billion video creations on TikTok.
Subtronics has graced festival stages such as Lollapalooza, Bonnaroo, Electric Forest, Bass Canyon, Electric Zoo,
Lost Lands, and Camp Bisco, along with many more. He has headlined sold-out events at venues such as Aragon
Theatre, Hollywood Palladium, Echostage, MTelus, and the Tabernacle. Subtronics’ had the honor of being chosen
as the first full capacity event at Red Rocks in 2021 which sold out in two days. The event, Cyclops Rocks, a curated
event by Subtronics and the next takes place in Florida called Cyclops Cove in December of 2021.
Presently, Subtronics is preparing to embark on his massive FRACTAL TOUR across the United States and Canada
in 2022.
When not producing “angry robot noises,” you can find Subtronics spinning poi and playing kendama, taking dabs,
and leading his devoted ever-growing band of followers in the ‘Cyclops Army.’
Notable Partnerships & Sponsorships: Twitch, Splice, G Fuel, Artisan Builds Computers, Sweets Kendamas, Koto
Alto THC Extract. 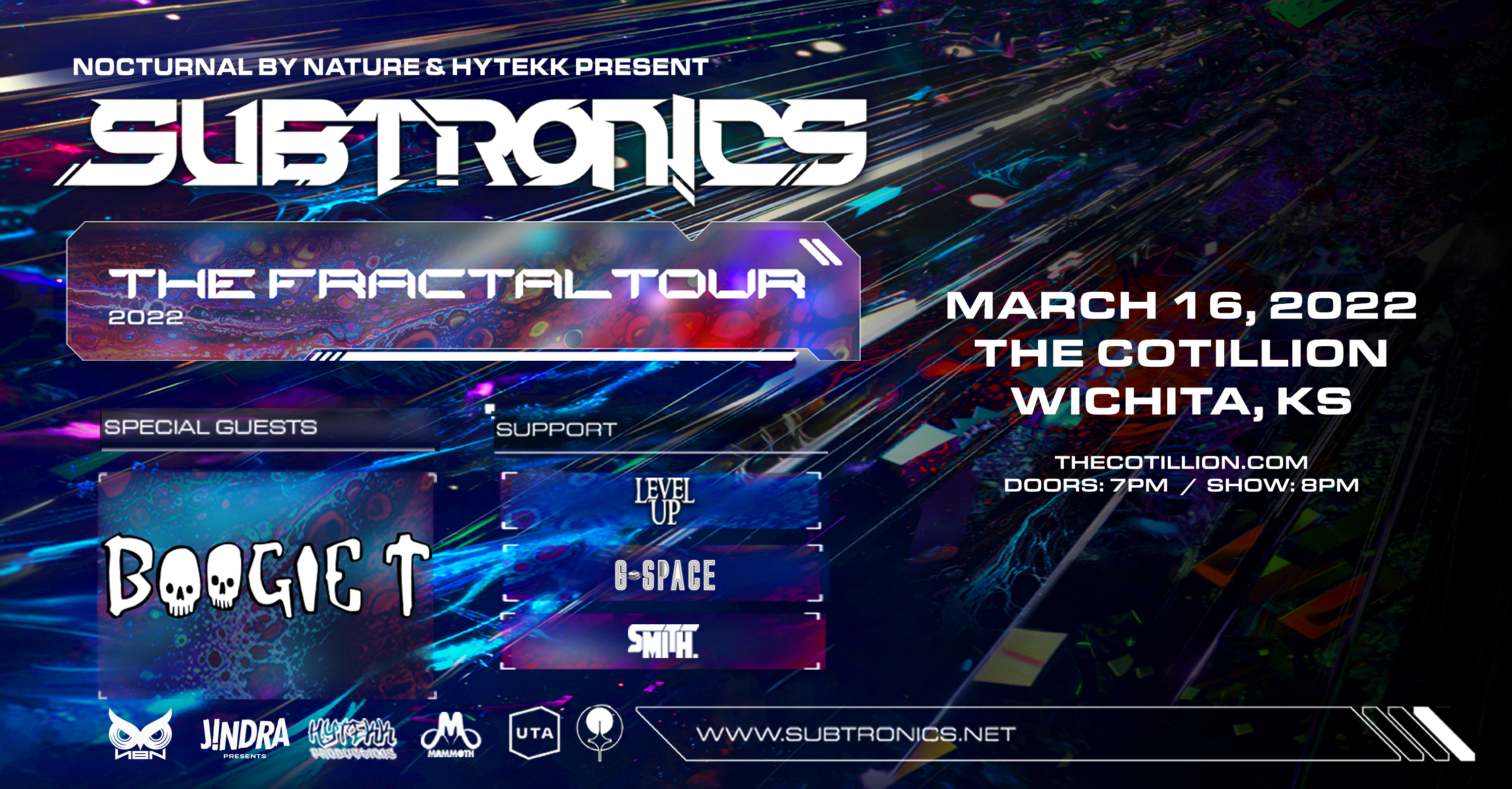